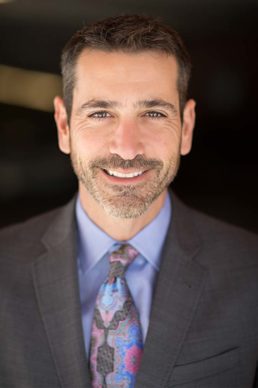 David believes that family – mishpucha – is what creates his balance in life. With a strong family anything is possible. His wife Ali and three children, Abby, Aiden and Bo are his rock.

To pay the bills, David is co-managing partner of the law firm Foster Graham Milstein & Calisher, LLP (“FGMC”). Originally founded in 1999, FGMC was quickly recognized as one of Denver’s “up and coming” law firms. The Denver Business Journal featured FGMC’s attorneys as emerging “Young Guns” on the local legal scene in 2001. Since 2001, the “Guns” have become stronger and better with age and have multiplied and FGMC has grown into a vibrant, multi-faceted law firm boasting over 30 lawyers.

David’s legal practice focuses on land use and real estate development matters. David is also involved with many governmental affairs issues both at the local and state level. To those who know David they consider him a deal maker and uniquely adept at balancing public and private interests in finding a better way to do the deal- better in terms of creativity, efficiency and the ability to bring parties with seemingly disparate interests to common ground.

In addition to family and work, David is committed to many charitable and civic causes. He learned at an early age that his faith and family encouraged Tikkun Olam (“repairing the world”). To that end, he has been involved with many different organizations in varying leadership roles, including: Shwayder Camp of Congregation Emanuel, Denver Jewish Day School, George Washington High School IB Foundation, Rose Community Foundation, Civic Center Conservancy, Jewish Colorado, Cherry Creek Area Business Alliance and many others.

David has been named a “5280 Top Lawyer” for the last four years, including 2019. David is also lucky enough to have received other awards including: Denver Jewish Day School’s Neshamah Yeteirah Award, Denver Business Journal’s Forty Under Forty, ADL’s Torch of Liberty Award, Jewish Colorado’s Young Leadership Award, Colorado Statesman’s 50 for the Future and several others. But, he is most proud to boast that he was the head coach for his daughter’s middle school soccer team and they won back to back city championships!